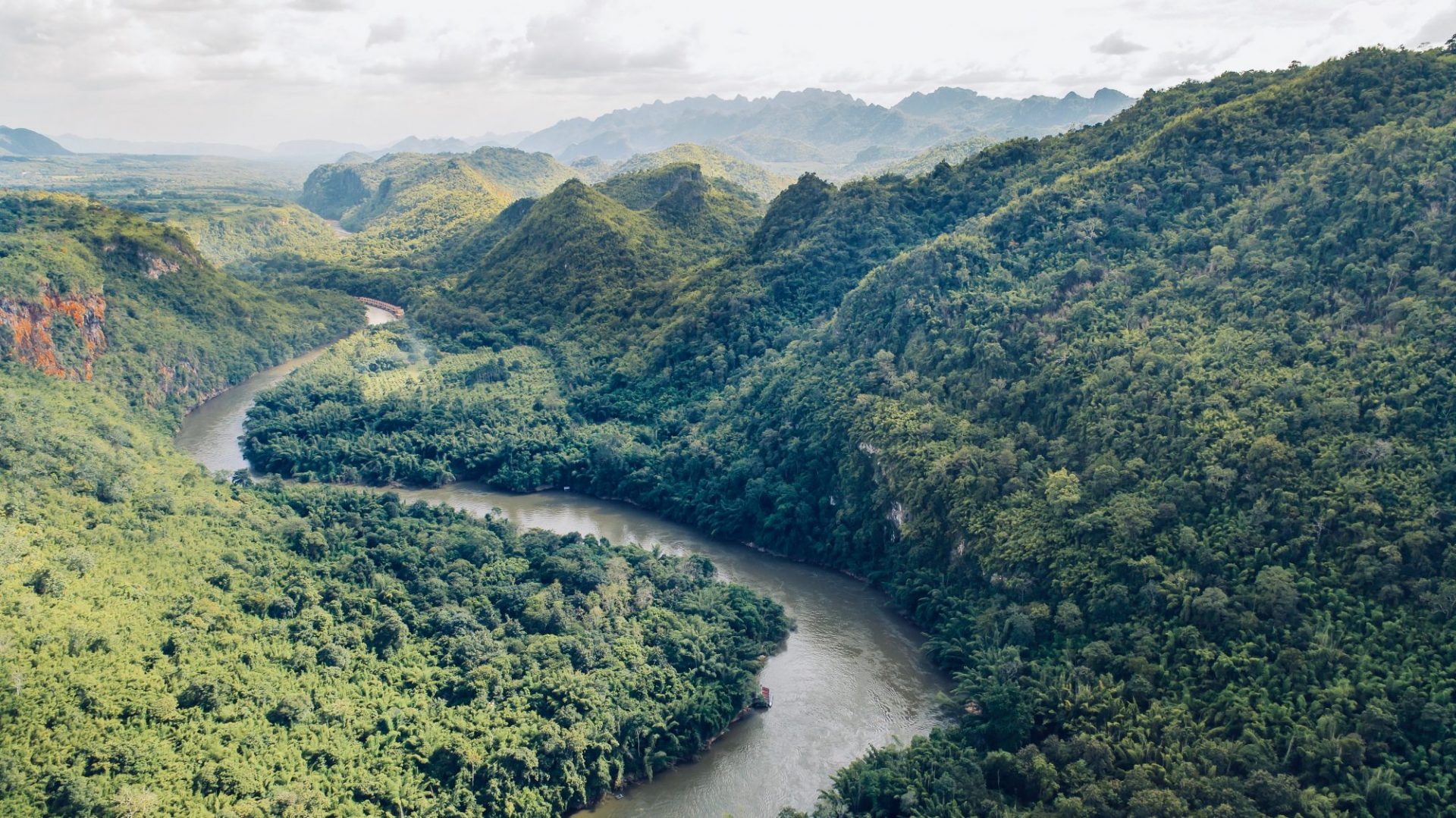 The River Kwai, more correctly ‘Khwae Noi’ (Thai: แควน้อย, English small tributary) or Khwae Sai Yok (แควไทรโยค), is a river in western Thailand, near, but not over the border with Myanmar. It begins at the confluence of Ranti, Songkalia and Bikhli Rivers. At Kanchanaburi it merges with the Khwae Yai River to form the Mae Klong river, which empties into the Gulf of Thailand at Samut Songkhram.

The river is chiefly known from the Pierre Boulle novel and David Lean film The Bridge on the River Kwai, in which Australian, Dutch and British prisoners of war were forced by the Japanese to construct two parallel bridges spanning the river as part of the Burma Railway, also called the Death Railway, for the many lives lost in its construction. One bridge was wooden and temporary. The other was made of concrete and steel and still exists. The bridges actually spanned the Mae Klong, but as the railway subsequently follows the Khwae Noi Valley, the bridges became famous under the wrong name. In the 1960s, the upper part of the Mae Klong was renamed the Khwae Yai (big tributary”).

A military history of the building of the bridges during World War II can be found in Professor Peter Davies’s biography of the British officer Philip Toosey, “The Man Behind the Bridge: Colonel Toosey and the River Kwai”. The book, and an associated BBC Time watch documentary, challenge many of the inaccuracies portrayed in Boulle’s novel and Lean’s film.

River Kwai Noi where River Kwai RESOTEL hotel located also runs through a national park, Saiyok National Park. The park’s area is approximately 500 square kilometers. Its landscape and scenery are arguably the most beautiful places in Thailand where once the famous Death Railway passed though Sai Yok Noi. The park’s major attractions are its waterfalls, including Saiyok Yai waterfalls which flows into the Khwae Noi river (River Kwai Noi).

The Pride of River Kwai

River Kwai (Kwai Rivers or Khwae Rivers) is known for the wide variety of experiences it offers. SERENATA Hotels & Resorts embraces this by inviting travelers to ‘Discover Thai Varieties in Style’. The area along the River Kwai in Kanchanaburi province, Thailand. These boutique hotels in Kanchanaburi are the flagship and pride of SERENATA and further the “Pride of the River Kwai”.

SERENATA’s new addition to the “Pride of the River Kwai” is the Home Phutoey River Kwai Resort, a family resort on a vast area of land right on the historical river. It gets in line with the other resorts of SERENATA Hotels & Resorts Group along the river, which have won numerous awards for their unique designs and professionalism. The resorts have been the travelers’ favorites since their establishment. You can choose from an exceptional ‘glamping’ (= glamorous + camping) experience, a chalet-style holiday paradise , floating rafts, which embrace the theme ‘back to the basics’, or the high-end luxurious floating rafts, which offer all the comforts you can think of.

Every one of the resorts embodies a unique concept, promising their guest incredible holiday experiences. The beauty of the jungle in the Kanchanaburi province is reflected in the lovely details in the resorts. At Hintok River Camp @ Hellfire Pass, camping resort, you will find that the bar is built around a tree and the stairs and platforms leading down to The FloatHouse River Kwai Resort were also built in a way to refrain from cutting down the trees along the river. In fact, the properties are built only out of trees, which were already dead. The resorts are set on the most beautiful pieces of land along the historic river Kwai. Mountain ranges are all around and every resort provides a view of the River Kwai. At River Kwai Resotel, world’s famous eco floating hotel, the guest can experience the nature and culture of Mon people intimately.

This website uses cookies to improve your experience while you navigate through the website. Out of these, the cookies that are categorized as necessary are stored on your browser as they are essential for the working of basic functionalities of the website. We also use third-party cookies that help us analyze and understand how you use this website. These cookies will be stored in your browser only with your consent. You also have the option to opt-out of these cookies. But opting out of some of these cookies may affect your browsing experience.
Necessary Always Enabled
Necessary cookies are absolutely essential for the website to function properly. These cookies ensure basic functionalities and security features of the website, anonymously.
Functional
Functional cookies help to perform certain functionalities like sharing the content of the website on social media platforms, collect feedbacks, and other third-party features.
Performance
Performance cookies are used to understand and analyze the key performance indexes of the website which helps in delivering a better user experience for the visitors.
Analytics
Analytical cookies are used to understand how visitors interact with the website. These cookies help provide information on metrics the number of visitors, bounce rate, traffic source, etc.
Advertisement
Advertisement cookies are used to provide visitors with relevant ads and marketing campaigns. These cookies track visitors across websites and collect information to provide customized ads.
Others
Other uncategorized cookies are those that are being analyzed and have not been classified into a category as yet.
SAVE & ACCEPT