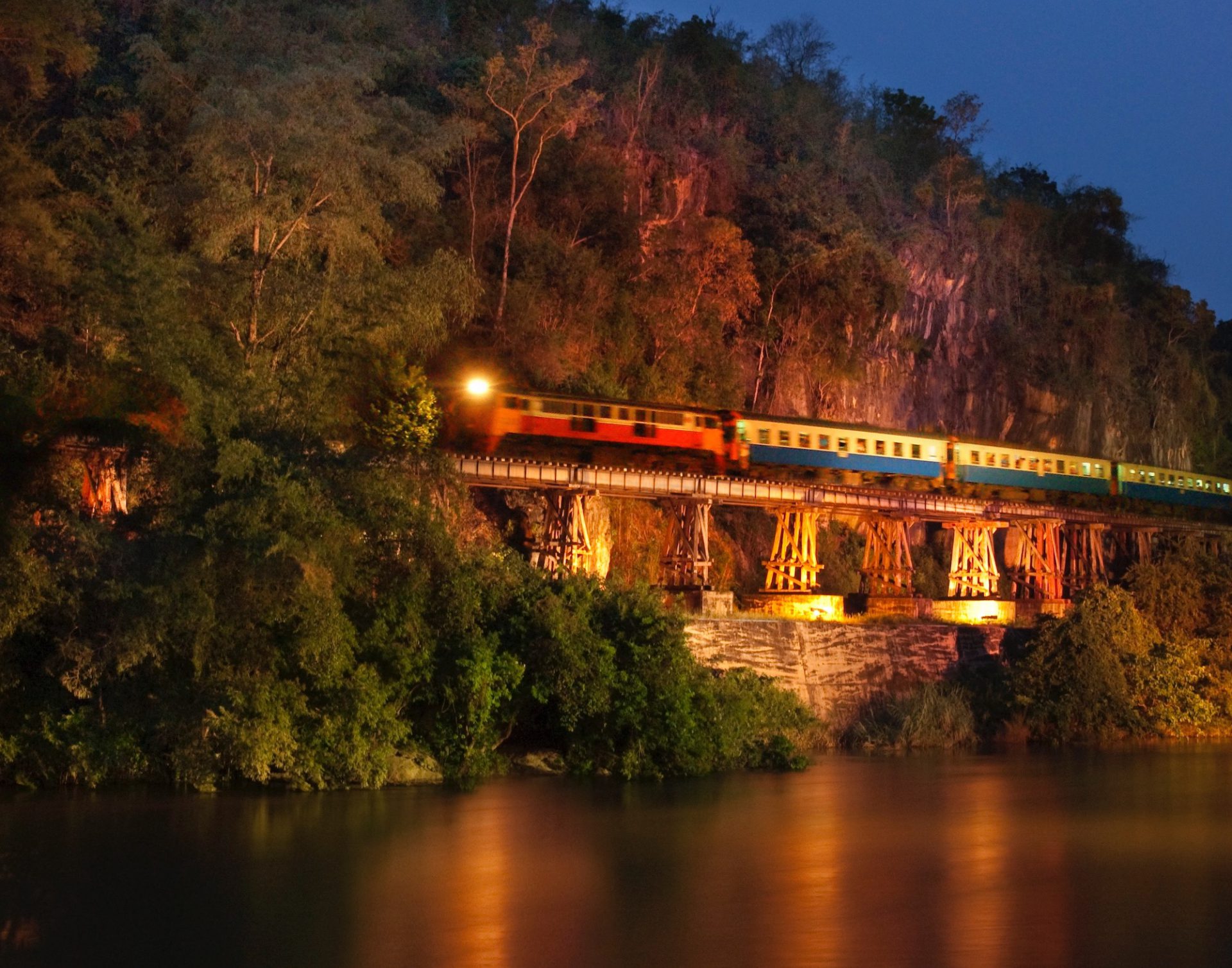 Kanchanaburi province, mostly mountainous terrain, covers an area of approximately 19,473 square kilometers and is the 3rd largest province in Thailand after Nakhon Ratchasima or Ko-Rat and Chiang Mai relatively. Situated approximately 129 kilometres west of Bangkok, Kanchanaburi shares a border with Myanmar (Formerly Burma) to the west, Tak and Uthai Thani Provinces to the north, Suphan Buri and Nakhon Pathom Provinces to the east, and Ratchaburi Province to the south.

In north and west Kanchanaburi, the terrain is comprised mainly of mountains and high plains, with the Thanon Thongchai Range acting as a natural border between Thailand and Myanmar. The range is the source of Kanchanaburi’s two most important rivers Maenam Khwae Noi (River Kwai Noi) and Maenam Khwae Yai (River Kwai Yai), which form the famous Mae Klong River. As a result, several of Thailand’s largest Namtok (waterfalls) and most extensive wildlife sanctuaries are found in this area.

The magnificent landscape and charming beauty of Kanchanaburi have resulted in major tourist attractions including several well-known waterfalls, caves which were once inhabited by Neolithic man, pristine national parks, tranquil rivers, virgin forests, and reservoir. Together, they offer an intriguing experience for first-time or repeat visitors. Whether its fishing, rafting, canoeing, mountain biking, bird-watching, star-gazing, golfing, elephant and jungle trekking, or even living in bamboo rafts, Kanchanaburi takes pride in offering them all.

The city of Kanchanaburi is located at the point where two tributaries, River Kwai Noi and River Kwai Yai meet and form the Mae Klong river. This is the location of the notorious Death Railway and the Bridge on the River Kwai one of the world’s famous World War II sites which has been immortalized in print and film.

In economic terms, Kanchanaburi has been doing well on a national scale, with over 10 per cent growth annually. Important industries include sugar, agricultural products and jewelry. Tourism is also a main source of income for the locals as the provinces high tourism potential has made Kanchanaburi number one among the west provinces in having the highest number of visitors each year.

Residents of Kanchanaburi are engaged in agricultural activities. Most of the locals are of Thai ancestry with notable Mon and Karen minorities. Rural dwellers enjoy living simply and respecting nature. Moreover folk music and dances dating back at least 500 years are still performed today.

According to a number of historians, the ancient town of Kanchanaburi was located near Ban Lat Ya, a small village situated approximately 16 kilometers north of the present town. The site was repeatedly recorded in Thai history as an invasion route where the Burmese used to enter Thai Kingdoms.

All of these magnificent stories and facts are what attract worldwide travellers to Kanchanaburi. River Kwai RESOTEL is one of Kanchanaburi hotels where our guests can experience it all.

This website uses cookies to improve your experience while you navigate through the website. Out of these, the cookies that are categorized as necessary are stored on your browser as they are essential for the working of basic functionalities of the website. We also use third-party cookies that help us analyze and understand how you use this website. These cookies will be stored in your browser only with your consent. You also have the option to opt-out of these cookies. But opting out of some of these cookies may affect your browsing experience.
Necessary Always Enabled
Necessary cookies are absolutely essential for the website to function properly. These cookies ensure basic functionalities and security features of the website, anonymously.
Functional
Functional cookies help to perform certain functionalities like sharing the content of the website on social media platforms, collect feedbacks, and other third-party features.
Performance
Performance cookies are used to understand and analyze the key performance indexes of the website which helps in delivering a better user experience for the visitors.
Analytics
Analytical cookies are used to understand how visitors interact with the website. These cookies help provide information on metrics the number of visitors, bounce rate, traffic source, etc.
Advertisement
Advertisement cookies are used to provide visitors with relevant ads and marketing campaigns. These cookies track visitors across websites and collect information to provide customized ads.
Others
Other uncategorized cookies are those that are being analyzed and have not been classified into a category as yet.
SAVE & ACCEPT