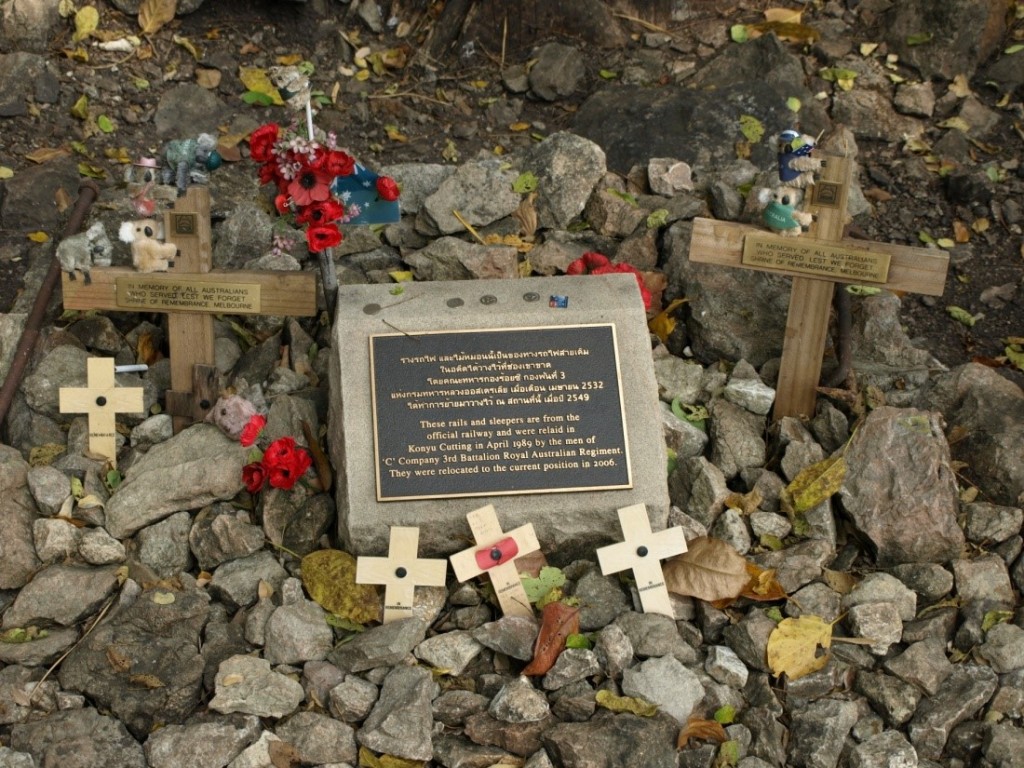 The 25th of April was a day full of emotions and grief for many Australians and New Zealanders. It was the day were all the victims of wars and conflicts, Australian and New Zealand Army Corps (ANZAC), were commemorated. Whereas the second world war took amongst others place in Thailand, Kanchanaburi received many visitors, coming together to commemorate the terrible events. For years is the slogan: ‘Lest we forget’.

The Japanese were setting the rules in the WOII. They captured many Asian labors, first on voluntary bases though when nobody volunteered anymore the Japanese army started to arrest them. Besides the 200.000 Asians, more than 60.000 allied prisoners of war were put to work, mostly originating from Australia, New Zealand, America, France and The Netherlands. In miserable conditions they managed to construct the so-called Death-Railway while facing huge obstacles such as the bridge over the River Kwai but also the Hellfire pass, a mountain pass which they needed to cross.

Speaking was the Australian Senator Michaelia Cash, she took a moment to remember the terrible events taking place at Kanchanaburi. The Prisoners of war were remembered, who suffered during their work to construct a railway through Thailand into Myanmar amongst poor circumstances. One of the former prisoners of war and one of the fortunate who survived the war, is Neil Macpherson. The 92 years old man from Mindurah attended the ceremony in a wheelchair. He mentioned that war is a terrible thing that you will never forget, survivors of war will most likely take their experiences into their graves.

Early in the morning, at 05.30 to be precise, the dawn service started at the Hellfire Pass, also: Konyu Cutting. The pass was located next to the Hellfire Pass Memorial Museum in the Kanchanaburi province. Most visitors wore sturdy shoes as the pass requires quite some stairs (therefore difficult to access for disabled people). Walking into the site would take approximately 20 min. After the ceremony of approximately 40 min. a traditional breakfast was served at the parking lot of the museum.

The second session of the special day, the 25th of April, took place at the huge War Cemetery of Kanchanaburi. It was a warm day, many people used an umbrella to protect themselves for the sunshine. The ceremony started one hour later than in previous years at 11.00 AM. Due to the increasing amount of visitors, this time would be more convenient and it would give visitors more time to reach the destination. The ceremony took approximately 45 min. with New Zealand hosting this year’s event and providing visitors, especially elderly, with the required facilities for a comfortable ceremony.

Do you want to come next year?

Did you miss this year’s ANZAC day but do you want to attend the ceremony next year? No problem you are more than welcome. For transport possibilities and accommodations have a look at www.serenatahotels.com – owner of five special resorts along the river Kwai near the Hellfire Pass.